In vaping, “unregulated tube mods", also known as mechanical mods or tube mods, have no circuitry or safety protections. They are simply metal tubes into which a vaping battery is inserted. This means you should take extra safety precautions when using a mechanical mod. Common vape devices we see that are considered “unregulated mechanical tube mods" are single 18650 tube mods and single 26650 tube mods. There are unregulated dual-battery boxes, but those require an even more detailed explanation, so  we’ll deal with them in a future post.

In the time I worked in a vape shop, and even now when I am helping at vaping events, there are things that I see vapers dothat are downright scary. From putting batteries in the wrong direction to building dangerously low resistance coils for a single battery mod. All of the following vape battery safety precautions are things I have actually seen done that can be extremely dangerous. 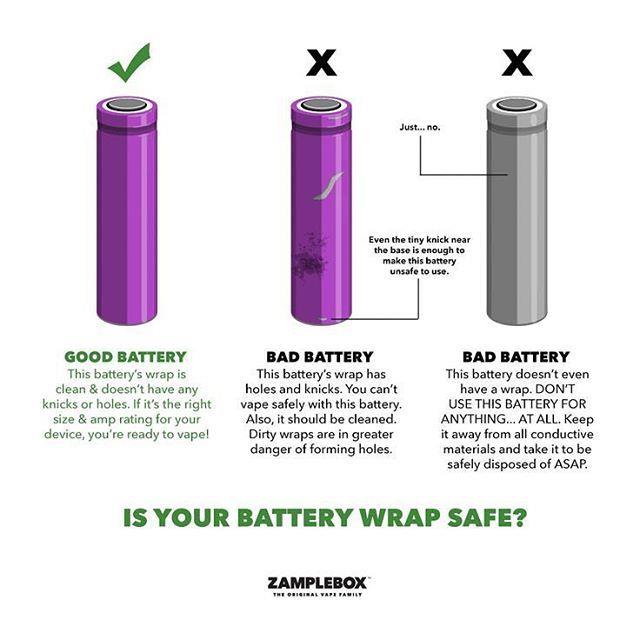 The dangers of using a damaged vaping battery:

Damaged battery wrapping exposes the metal body of the battery which in this case is the anode (negative electrode in the battery circuit). The danger of using a battery with a damaged wrapper arises when the exposed anode contacts the inside wall of the mod, completing the circuit and causing a damaging, and potentially dangerous, short. Bad vape vibes, people!

If there is a cut, knick, or any other sort of damage to your vaping battery’s wrapper, I recommend buying a new battery, especially if you like the idea of keeping your hands and fingers. There are some vapers who prefer re-wrapping their damaged batteries. If you are an experienced vaper and feel comfortable re-wrapping your batteries that is fine as well, but please be very careful. Be sure to keep battery wrappers clean, and when you’re not using a battery, be sure to store it in a vape battery case.

Note: While some people rewrap their batteries and have zero issue doing so, the safest thing we can recommend is simply buying new batteries. If you do not feel comfortable re-wrapping yours, we recommend just buying them or checking with your local vape shop professionals. 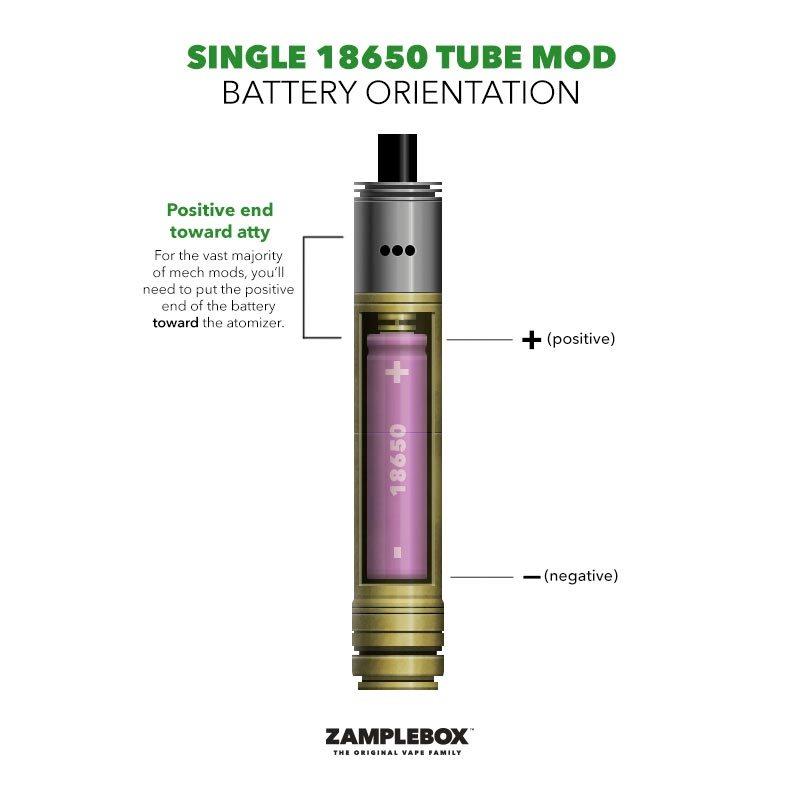 The Issue: Putting vaping batteries in the wrong direction

This includes putting a battery in with its positive pin facing the mod’s switch.

The dangers of using a vape battery upside down:

Mechanical mods are simple circuits, a battery, a switch and a load (resistance). Technically, when using a single 18650 mechanical mod, it does not really matter which side you put your battery in, even though I would never recommend doing this. The reason this still works is because your load (RDA, RTA, tank) does not have a polarity. However, I still highly recommended putting your batteries in the correct direction for a proper ground.

I suppose this is a simple one… just put your batteries in the correct direction. The correct orientation for a vape battery inside of a single-battery tube mod is with the positive-pin on the battery facing towards the atomizer. That said, there are some weird tube mods out there that buck this trend, so be on the lookout for those, and always check your mod’s documentation or look for the + - symbols when you get a new vape mod. 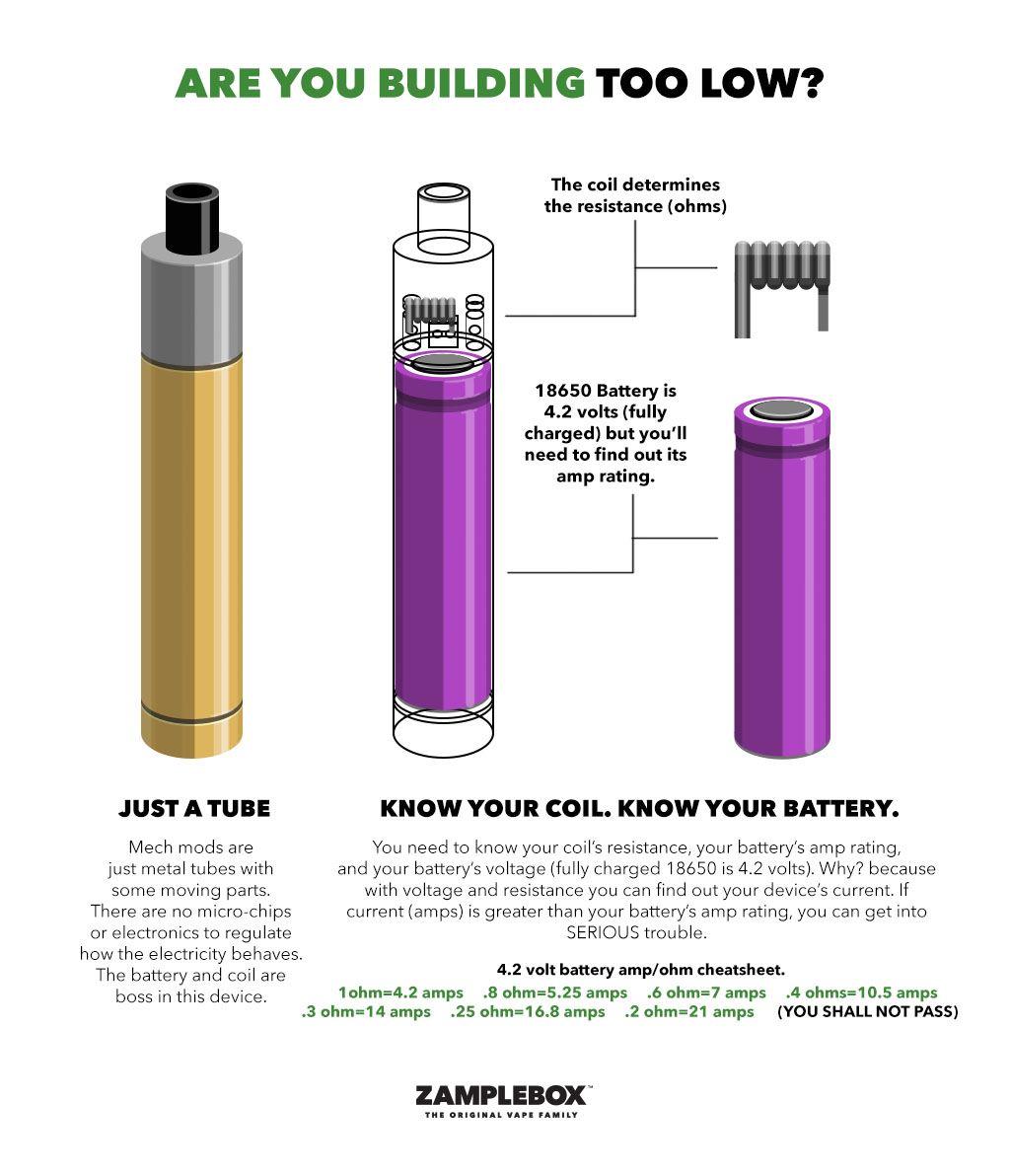 The Issue: Building vape coils to a dangerously low resistance

For example, if you are using a vape battery rated at 20amp continuous discharge, a .1 ohm build on an atomizer  pulls 42 amps from your battery (4.2 volt battery).

The dangers of exceeding the vaping battery amp limit:

The lower the resistance of an atomizer, the more amp draw you will be pulling from your battery. High current (high amperage) means that there are more electrons flowing per second past a specific point. When you reduce the resistance of a vape coil, the wattage is increased and so is the heat. Exceeding the amperage rating of a vaping battery is dangerous because it can cause the battery to fail or vent, which could cause the battery to catch fire or explode.

It is every vaper’s responsibility to know the amp limit of the batteries they are using. Most 18650 batteries are only rated at 20 amp continuous discharge (even if they are advertised differently). I won’t lie and say that I have never built dangerously low, but I would never recommend another vaper do so. Realistically, the safest resistance on an unregulated single 18650 tube mod would be .2ohm  or higher. To find your amp draw, divide 4.2 volts (fully charged battery) by the resistance of your atomizer.