For Safety's Sake: Know the Difference Between Unregulated Series and Parallel Box Mods 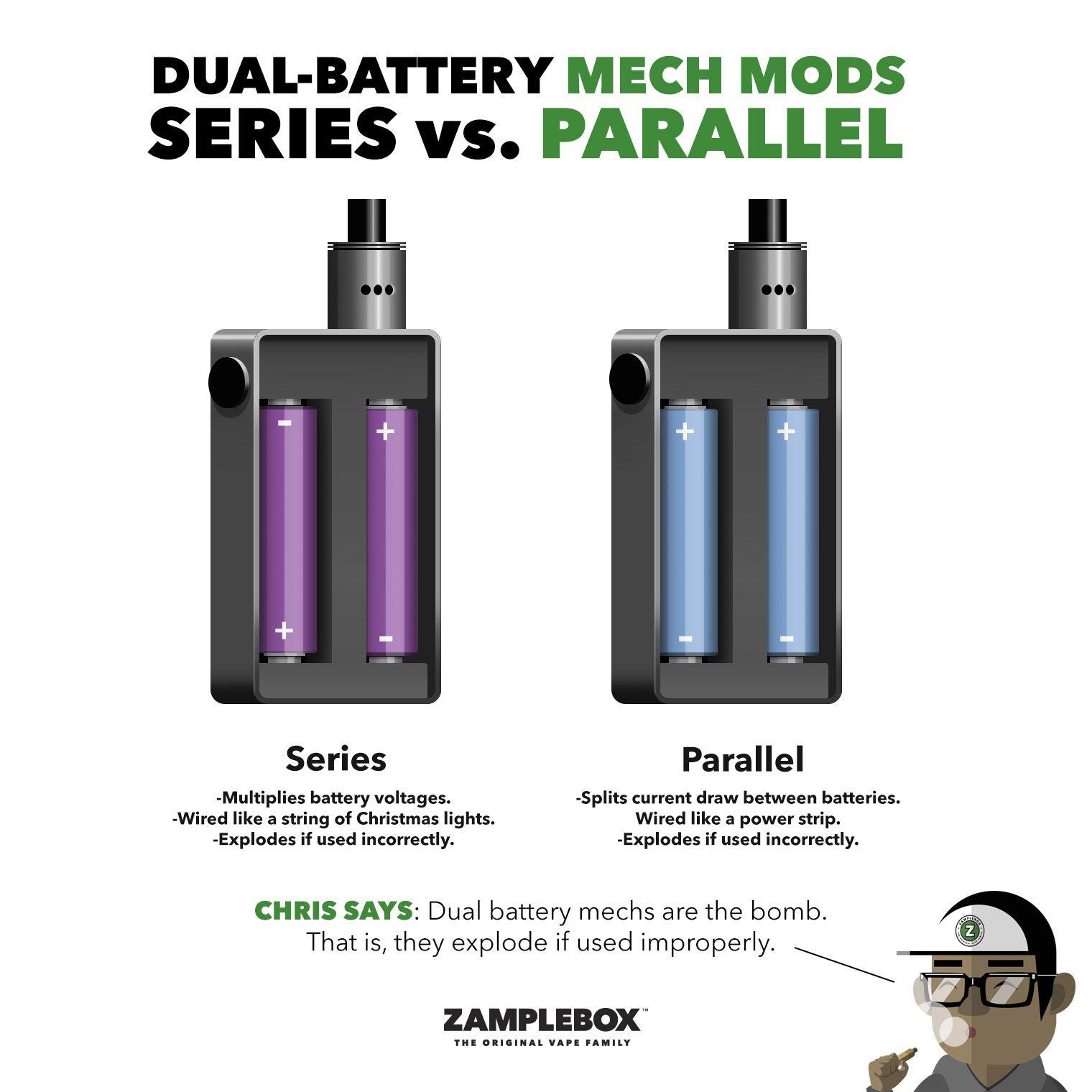 The box mod craze has been going strong for quite some time now. With many of these new vaping devices on the market comes a whole new learning process in vaping battery safety. While many vapers believe they understand the difference between an Unregulated Parallel and Unregulated Series box mod, the reality is that a large number of people using these devices do not really understand the way that each of these circuits are actually connected. Not knowing can turn even simple mistakes into very dangerous scenarios.

It is important to understand the way each of these devices are designed because when using an unregulated series or parallel box mod, battery orientation is crucial to your safety. While working at a vape shop, I would see many vapers who would come in having issues with their devices, saying that their mod all of a sudden started making a hissing noise… if they were not able to rip the batteries out of the device soon enough this generally became disastrous. I have heard many different outcomes from minimal device damage, to batteries hissing and releasing toxic gas, to them catching fire or exploding.  Now, normally it was not easy to get a vaper to admit that they might have messed up with battery orientation, but they could not exactly lie about it either. The Batteries that we use for vaping are built in such a way as to vent out the top, or the positive end of the battery. Knowing this I could always see what caused the damage.


What Causes Battery Failure and Possible Harm to the User?

Venting occurs when a battery fails. Battery failure is normally caused by hard shorts, damage to the battery, or user error. When a battery vents it starts hissing and releasing toxic gas, and can potentially catch fire or explode.


We were taught at a young age to never stick a fork in a wall outlet. As vapers, we need to understand that taking the time to make sure our batteries are facing in the right direction (especially in unregulated devices) before firing the device can prevent dangerous scenarios like a fire or explosion.

Unregulated series box mods are devices that stack the voltage that is being applied to the resistance of the coil. This type of circuit creates a current from each battery at the same time and combines the voltage from each battery. While the voltage is multiplied by the number of batteries, the amp draw remains at that of a single battery. 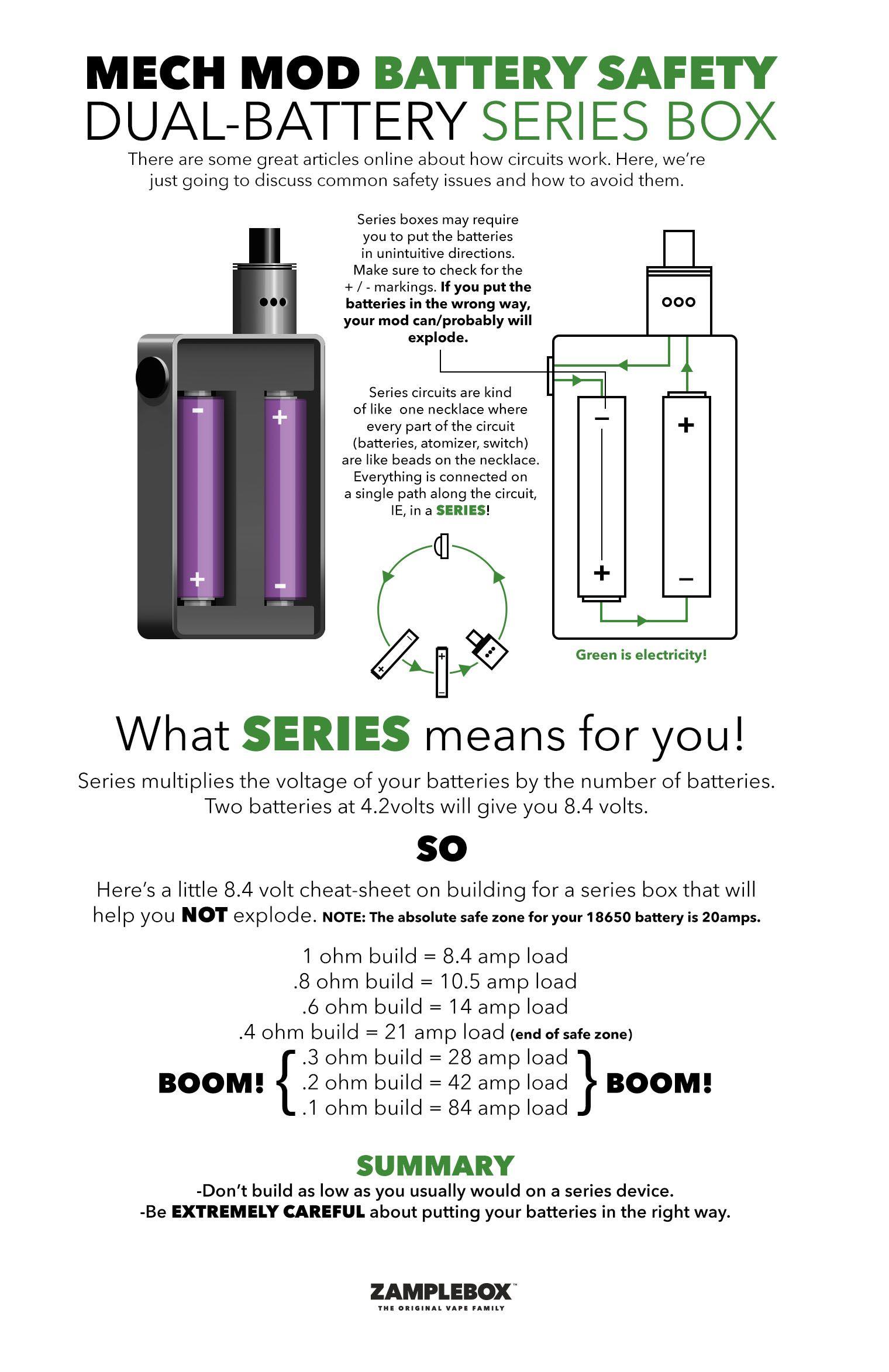 With the rise of new series devices such as the noisy cricket, I have seen vapers using series box mods who do not really understand the way that these devices work. For example, a .12 ohm build is generally not safe on a single 18650 device because you are exceeding the battery’s continuous discharge rating with a 35 amp draw. While we do not generally consider this a safe build for a single 18650 device (many vapers still run this low), just imagine what this same build would do on a unregulated series device. It would be drawing 70 amps, which is even more dangerous!


While it appears that the series “hits harder" than a parallel box mod, it is really all in how you build it. This happens because of the way that the circuits are connected. The current in series travels through each component in the circuit. In a series circuit, all of the components carry the same current. In vaping this means that that each battery will have the same amount of amp draw placed on it as it would with a single battery.

NOTE: It is not safe to build super sub-ohm resistance because this is stacking the

batteries and not splitting the load

Unregulated Parallel box mods are devices that split the current between two or more batteries at the same time. While the total voltage remains that of a single battery (4.2v), the total battery life (or mAh rating) is increased as well as the overall amperage since there is less draw on any one battery in the circuit. 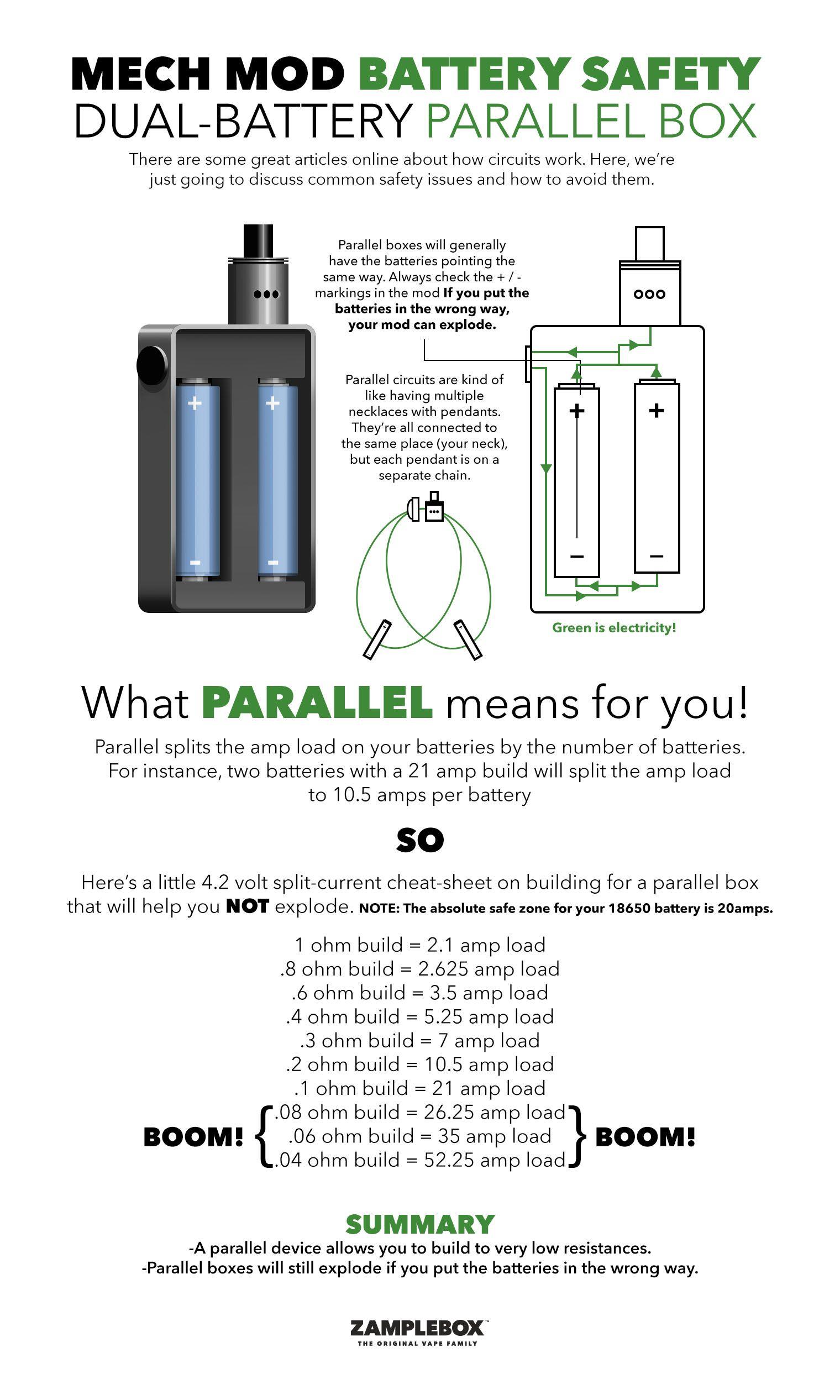 Is There a Safe Way to Run Super Sub-ohm Builds?

A question I receive from a lot of vapers is this: “Is there a safe way to run my super sub-ohm builds?" Well, the answer to that is possibly! Depending on the Unregulated Parallel box you have it could be safe to run lower ohm builds. However, it is important to pay attention to the safety ratings for the device you have. Some devices are able to handle the subohm builds and others cannot. If you are unsure, check with your local vape shop to find out what your device is capable of.

NOTE: Even though parallel box mods are a safer option to build on using low resistances because the battery is splitting the load between the two batteries, It is still your responsibility to know the amp limit of the batteries you are using and whether or not your device can handle the ohm load.

— All positives connected together

— All negatives connected together


Problems Arising with these devices:

Whether you are using an Unregulated Parallel box mod or an Unregulated series box mod, both devices are capable of putting out the same amount of power. In other words, both devices are capable of safely putting out the same wattage. As long as you’re using safe batteries for your device, you can adjust your build on either device to receive maximum output.


* To achieve the same power on a series box mod with a parallel box mod, you divide the ohms of your build on the series mod by 4 (multiply by 4 for parallel to series conversion)